Persistency built in, not a database add-on

Allegro CL ® is the most powerful dynamic object-oriented development system available today, and is

especially suited to enterprise-wide, complex application development. Complex applications with billions of objects are now made easy with Allegro CL 10. The complexity of today's software applications and the explosion of data size are pervasive in all fields ranging from Life Sciences to Manufacturing to Financial Analytics. Allegro CL 10 is the most effective system for developing and deploying applications to solve these complex problems in the real world. For more information, contact info@franz.com.

"Allegro CL 10 confirms Franz's commitment to providing a leading Common Lisp platform. The upgrade path is completely smooth and the under-the-hood improvements, especially in the garbage collector, make it a worthy successor to what remains one of the best environments for developing and delivering amazing software."

"Allegro CL 10 with AllegroCache continues to deliver performance improvements that facilitate the success of our products with the U.S. Dept of Defense. Lisp is the ideal implementation vehicle for our machine learning algorithms and large scale, parallelized stochastic simulation product sets. We are delighted with the Garbage Collection enhancements in Allegro CL 10."

"Common Lisp remains one of the best languages for Artificial Intelligence applications, its flexibility enables rapid experimentation and deployment. Today's Lisp compilers are robust and flexible allowing development entirely within Lisp or in combination with other languages. For example, our CyclePad system for helping engineering students learn thermodynamics is written entirely in Allegro CL. Similarly, our sketch understanding system, CogSketch, which is a novel platform for both cognitive science research and education is primarily written in Allegro CL with two modules in C."

AllegroCache -- The enabling technology behind Allegro CL persistent objects is a high-performance, scalable, dynamic object-caching database. It allows programmers to work directly with objects as if they were in memory while in fact the object data is always stored on disk. It supports fully ACID-compliant transaction mode with both long and short transactions. It automatically maintains referential integrity of complex object networks. AllegroCache provides 64-bit real-time data caching on the application memory to achieve very high data access throughput over as large a data set as required. AllegroCache features include:

The source stepper displays source code while stepping through a form. When using it with the IDE, (not available on Sparc or AIX platforms) the source stepper is associated with the new Stepper Dialog. The Stepper Dialog allows carefully testing compiled code by interrupting execution at selected forms in the original source code and at macroexpansions of the code, allowing state to be examined at each stop point.

The dialog displays the original lisp source code for a function or method that is being stepped through, highlighting the form at which the stepper is stopped. Button widgets allow proceeding in various ways each time execution has been interrupted. The dialog also displays macroexpanded forms and the values of arguments and local variables, updated after each step. The IDE's code editor can be invoked at any time on the code being stepped through.

The dialog is implemented on top of the base lisp's stepping facility, which also has a simpler textual interface that can be used in a lisp listener. See The Lisp DeBug (ldb) stepper and The source stepper, both in debugging.htm. 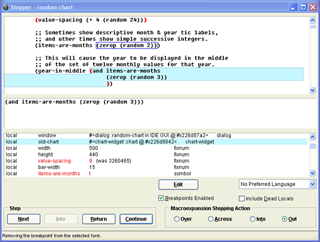 The Definition Pane (at the top of the dialog) shows the source code for the function or method that's currently being stepped through. This is a copy of the real source code text, complete with comments and original line breaks. The form at which the stepper is currently stopped will be highlighted with a different background color. Red parentheses are drawn around any breakpointed forms. The breakpointable form under the mouse (if any) in the Definition Pane will have a blue border drawn around it.

The form in the Definition Pane where the stepper is stopped is drawn with a background color that can have different meanings. An explanatory note will appear in the dialog the first three times each highlighting color is used. The default color is blue. When green, source-level debugging information is available for the function that the highlighted form will call. This is a "green light" that pressing the Step Into button will continue doing source-level stepping. When orange, you are stopped at a macro form. When gray, it means that no source code range is known for the current step point.

The Form Pane (second from the top) shows just the form at which the stepper is currently stopped. This form would be executed by a subsequent Step Next. Sometimes this is a form in the original source code, and is the same as the highlighted form in the Definition Pane, and at other times it is all or part of a macroexpansion.

Assembly-Language Stepping in the Stepper Dialog

If breakpoints are added to functions for which source-level debugging information is not available, the Stepper Dialog will still display some information and allow stepping to be done.

Please refer to the Stepper Dialog documentation for the full details.

Allegro CL 10.1 is available on the following operating system versions. The Types are either non-SMP or SMP. SMP is not available on all platforms.